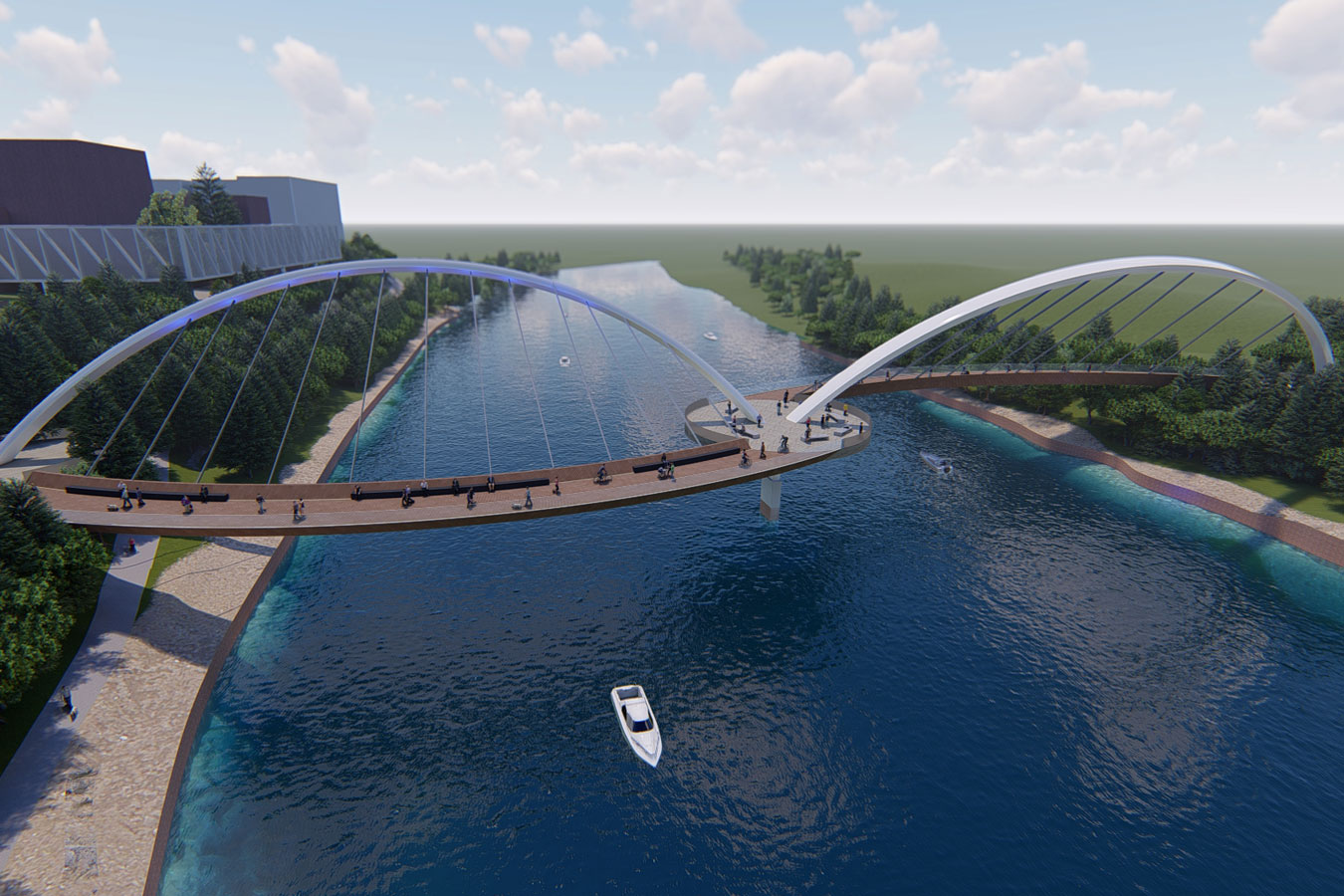 Behind every good design is an even better story. A story that aims to connect and shape people’s experiences of an environment.

This story begins with a chance encounter between Chow:Hill architect, Brian Squair and members of Hamilton/Kirikiriroa’s Tangata Whenua.

The Chow:Hill Hamilton director was awaiting the start of a meeting when he overheard a comment. “The group referred to the crossing of the Waikato River as a journey whereby Māori and Pākehā come together from different sides,” he recalls.

That poignant statement was the inspiration Brian was looking for to influence the design of what has become coined as the Kotahitanga Bridge.

The prologue to this story is a request by Rotary New Zealand to design a pedestrian bridge over the Waikato River to commemorate the organisation’s centenary. Brian saw an opportunity to recognise Rotary’s milestone with a bridge of unique design that would not only provide a connection between both sides of the Waikato River, but create a pathway to the new Waikato Regional Theatre.

“I could see an opportunity to switch the narrative. Instead of the Waikato River being a point of separation, we wanted to create a progressive pathway. Rotary has played a huge part in uniting our community and we wanted to honour the impact they have had. This is how Kotahitanga was born,” explains Brian.

Kotahitanga means Coming together in unity. “We’ve taken the idea of two sides of a river coming together, as well as two cultures coming together, and meeting in the middle for kōrero, enjoyment and connection,” says Brian. “Anyone from any ethnic or social background can enter the Bridge from either side, move towards the central point of connection, and bring our community together in its diverse makeup.”

Brian says the prospect of the Bridge touching the river is a nod to a key Māori ceremonial practice by way of touching the wai-ora for cleansing. “I tested this idea with Kaumātua, Tame Pokaia. This cleansing practice is life-giving, it’s sustaining and it’s very necessary in terms of bringing different people together.”

The idea of a pōwhiri is also intimated in the Bridge design, symbolising the coming together of Tangata Whenua and Manuhiri. The bridge is curved so the journey from each side isn’t direct, but meanders. “It’s designed to show the pathway we’ve forged towards unity,” says Brian.

Connecting with the Waikato Regional Theatre

On 31 October, Prime Minister Jacinda Ardern announced a $12 million government boost to support the Waikato Regional Theatre, designed to be as much a world-class facility as a community asset. The Kotahitanga Bridge could provide the connection between the east side of the River to Hamilton’s bustling south end. “Just imagine what the Kotahitanga Bridge could be like as a pedestrian walkway from Memorial Park off Anzac Parade, across the Waikato River, to the new Waikato Regional Theatre site,” says Brian. “The idea of this pedestrian bridge is that users enjoy the journey and dwell on the bridge, not merely pass over it like some basic outdoor corridor.” “On a more practical note, it would provide some parking solutions for Theatre patrons who could park on River Road and walk across to the CBD. There would also be a connection down to the river promenade.” “Packaged together, these two propositions would create an exciting offering for the region – encouraging tourism and helping locals to stay connected with our CBD and creativity in the Waikato.”

Kotahitanga for Our Community

The next chapter in the Kotahitanga story is to look for external funding.

“Rotary is looking to commence funding for a pedestrian bridge, but for a design of this magnitude we need significant investment,” says Brian.” At Chow:Hill, we believe in supporting our local community in a way that encourages connection. Through shaping our experiences in a public space, we are collaborating on the design of our city, “Although Kotahitanga is still in the feasibility phase, the Bridge would provide an important link to the community, creating a sense of connection for everyone. We’re excited to see how this idea progresses."